Jonas Mekas’ films and a poetry reading in Biržai 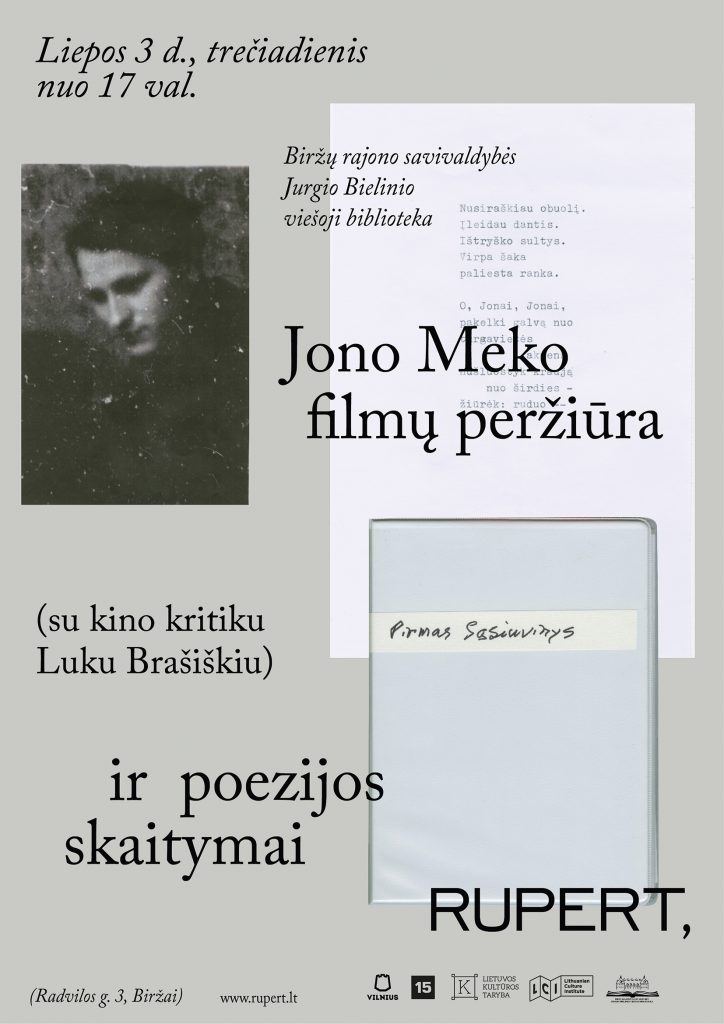 On Wednesday 3 July Rupert is delighted to invite all to a screening of Jonas Mekas’ films and a poetry reading at Jurgis Bielinis public library (Radvilos str. 3, Biržai). The event is part of Rupert‘s exhibition Jonas Mekas: Let me dream utopias (20 June – 21 July).

Following a screening of Jonas Mekas’ films, This Side of Paradise: Fragments of an Unfinished Biography (2000) and As I Was Moving Ahead Occasionally I Saw Brief Glimpses of Beauty (1999), the film critic and curator, Lukas Brašiškis, will deliver a presentation titled ‘Cinema as Poetry, Images as History. The Affect in Jonas Mekas’ Diary Films’. In this presentation, Brašiškis will present how Walter Benjamin’s writings and Jonas Mekas’s diary films share a similar attitude in their attentiveness to surroundings and to history as an affective experience.

The screening will be followed by poetry readings of Jonas Mekas’  previously unpublished poems taken from over 60 years of his life. The poems were written in different places and periods, from his adolescence in Lithuania (in Mekas’ native Semeniškiai and Biržai) to the years of forced labour and ‘Displaced Persons’ camps in Germany, where he spent several years together with his brother Adolfas Mekas, and finally his life in New York. The poetry collection presents Mekas’ life work in poetry or as he once called it himself ‘an exposition of dusty poetry’. These poems can be seen as both works in themselves and draft material for other projects (essays, memoirs, films).

The event is organised together with the Jurgis Bielinis Public Library in Biržai. The exhibition Jonas Mekas: Let me dream utopias at Rupert will be open until 21 July.