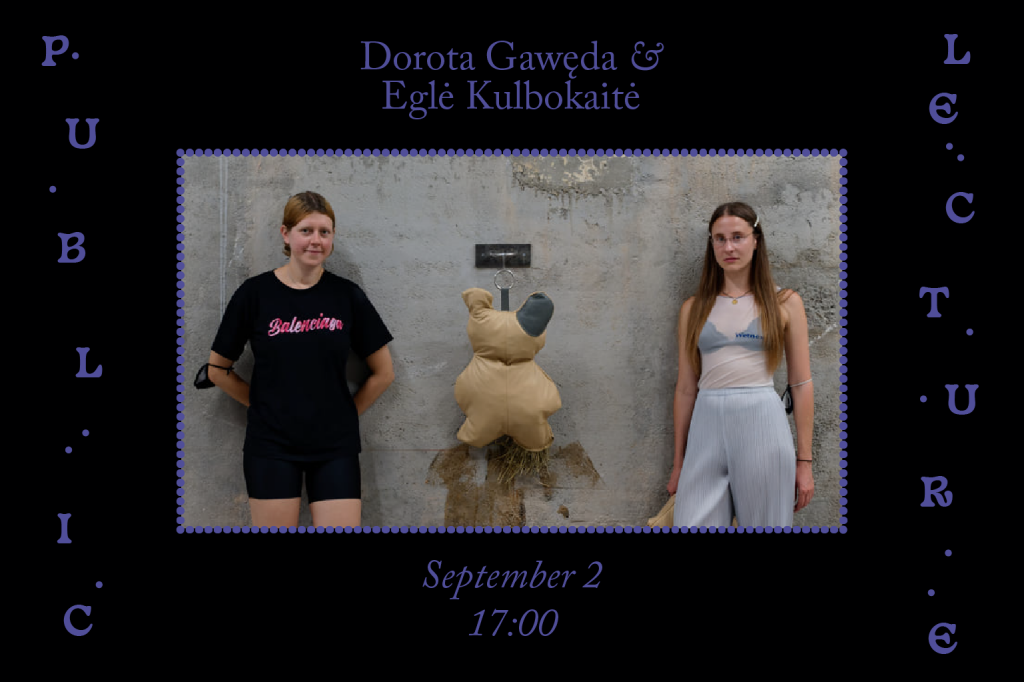 Rupert’s Alternative Education Programme in collaboration with Vilnius Art Academy presents a public screening of Mouthless Part I and a talk by Dorota Gawęda and Eglė Kulbokaitė facilitated by Tautvydas Urbelis and DSL. The talk will peek behind the scenes of finished work and wander into territories of research methodologies, collaborative tactics, intersectional practices and questions of various entanglements. Following educational and procesual undertaking of Alternative Education Programme, the event will invite the audience to join the conversation and experience complex, but open process of ‘making art’.

Mouthless Part I opens up and an important process of investigation into the concept of ‘Nature’ as that, which has traditionally been defined as outside to the subject; and the illusory promise of a subjectivity as whole and separate to the environment; and reconsider the art-historicised trope of landscape as technologically framed image. Mouthless Part I research spans a number of topics and urgencies the artists see as intertwined into the ecology of landscape including: specific accounts of witch trials; histories of European deforestation; contemporary desertification; various rituals connected to mourning, death and the threshold; eco-feminist theory, specific accounts of witch trials; recent bog fires in Eastern Poland; folkloric undead beings originating in Slavic and Baltic cultures connected to the soil, swamp and terrestrial waters; historic redefinition of the relation of the individual and the land and the contemporary complexity of the overhanging ecological drama.

Mouthless Part I (2021), a film work by Dorota Gawęda and Eglė Kulbokaitė, is a study of the lack of comprehension, a meditation on free-flowing mutation, and a radical shift of perspective on humankind and the natural world. Confusion seeps into the cracks of history and flourishes in the comforting darkness, intricately organic like wet forest moss. Losing the rigidity of knowledge becomes a liberatory experience which enables finding voice for those who have been denied it – today and through the centuries.

“The opening scene of Mouthless Part I is staged as our long-term performative project Young Girl Reading Group,” artists Dorota Gawęda and Eglė Kulbokaitė explain. “Readers take turns and deliver quotes from a number of selected texts: theory, folk tales, science fiction and poetry intertwined. What is new here is the introduction of a multiplicity of languages and the disorientation this creates – both for the readers and the audience. The texts become chant and texture; remote and alien voices gradually possess the readers”.

Young Girl Reading Group is a project by artists Dorota Gawęda and Eglė Kulbokaitė, which came into existence as an actual reading group in their Berlin flat in 2013. The title is inspired by Tiqqun’s 1999 publication “Preliminary Materials For a Theory of the Young-Girl” and the concept of the Young-Girl, a category identified as neither age nor gender-specific, but rather as a product of consumer society and the epitome of its model citizen. Throughout the years, an act of collective reading has become a basis for their multifaceted artistic practice spanning a dozen countries. Gawęda and Kulbokaitė produce installations and sculptures, work with texts, scent and garments, video and photography – and, most importantly, bodies, voices and visions of collaborators they bring together.

Mouthless Part I started as part of Gawęda and Kulbokaitė’s solo exhibition in Switzerland at Fri Art Kunsthalle in Fribourg. The artists worked with the Fribourg City Archive, and specifically the project which involved digitalisation of the secular court logs of cases dealing with trials related to magic. They were interested in the history of witch hunts – and how the ideas which enabled these prosecutions were “created in the very beginnings of the capitalist system and transposed with the colonial system to other continents”. Mouthless Part II, a continuation of this research topic, is currently in production and will be shown as part of Gawęda and Kulbokaitė’s show ‘Laments‘ at Istituto Svizzero in Palermo opening on the 30th of September 2021.

Irene Silverblatt’s “Moon, Sun, and Witches: Gender Ideologies and Class in Inca and Colonial Peru” and Maryse Condé’s “I, Tituba: the Black Witch of Salem”. They also incorporated research on Eastern European rituals related to the conjuring ghosts of the deceased (Dziady in Polish, Vėlinės in Lithuanian) seeking to create a hybrid multilayered space: “We are interested in the moment when the dead and the living seem to inhabit the same plane, and the distinction between the two is not that clear cut”.

One of the central themes in Mouthless Part I is trying to understand the synthetic concept of Nature and how it came into existence. “We are interested in how artists historically participate in this development of separation with the continuous portrayal of nature as land to be studied, explored, colonised and owned. The beginnings of witch persecutions were paralleled with the intensified deforestation in Europe, the extreme exploitation and privatisation of land. Alongside, we are looking into the horror convention in literature and film thinking about the monstrification of landscapes, forest and deserts being presented as the source of horror”. In the film, the process of reading is merged with the footage of woods, agricultural symbols like haystacks placed in sterile environments, a plethora of voices and languages, and GAN algorithmic images depicting mutation which all together creates a fluid non-linear narrative.

“For us, the nonlinear system of narration first and foremost refers to stories with no specific author – stories typical of folklore undergoing constant retellings, therefore, mutating with time,” Gawęda and Kulbokaitė add. “We are interested in the collective creative process and the belief systems created by the communities. Such narration introduces diverse points of view, a polyphony in resistance to the hierarchies of the single (usually white male) author, offering alternative ways of understanding history and a possibility for re-rediscovering missing and forgotten stories”.

Dorota Gawęda (PL) and Eglė Kulbokaitė (LT) are an artist duo established in 2013 and based in Basel, Switzerland. They are both graduates of the Royal College of Art in London (2012). Their work spans performance, installation, fragrance, sculpture, painting and video.

They have also participated in numerous international residencies including Alserkal Arts Foundation, Dubai; La Becque, La Tour-de-Peilz, Switzerland; Onassis AiR, Athens. Gawęda and Kulbokaitė are the recipients of the CERN Collide Residency 2022 and the Swiss Performance Art Award (2021). The duo are also the founders of YOUNG GIRL READING GROUP (2013–2021).