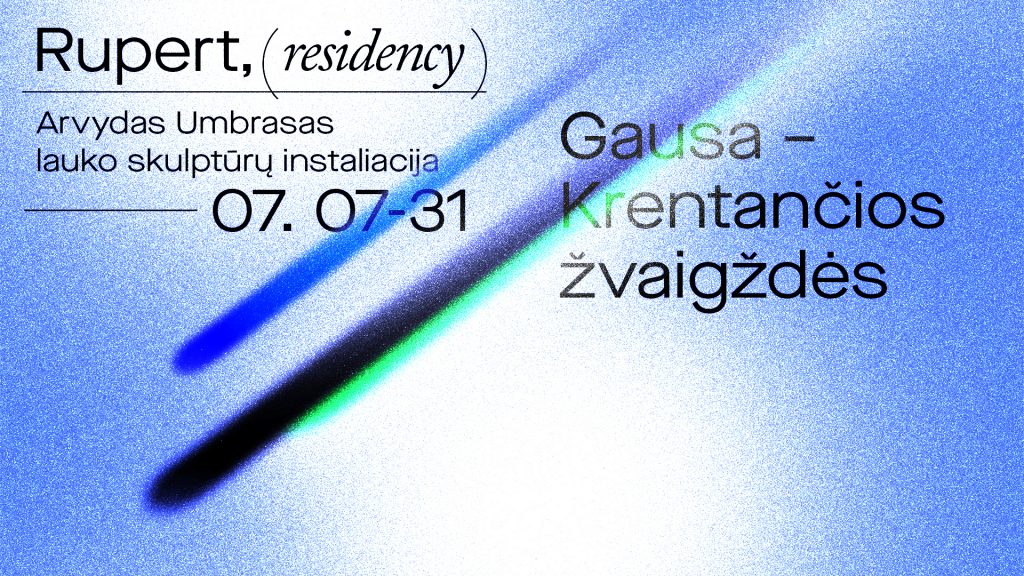 From 7 to 31 July, 2020 Rupert presents outdoor sculpture installation by current artist-in-residence Arvydas Umbrasas. The sculptures will be installed near by Valakampiai II beach in the field behind the Pakrantė building (Vaidilutes st. 79).

We recommend to visit sculptures in the daylight.

Pakrantė can be reached by bus no. 15, leaving from “Tverečiaus” bus stop at hourly intervals. The bus stops at “2-asis paplūdimys”, right in front of Pakrantė building where Rupert is located. A full timetable can be found here.

More about the project:

Three piece outdoor sculpture installation titled Abundance – Shooting stars was created in Bijutiškis village (Molėtai district municipality) close to Molėtai Astronomical Observatory and Lithuanian Museum of Ethnocosmology where a small meteorite is being safely kept behind glass showcase doors. Supposedly older than the Earth, a cold piece of metal became the inspiration for the project.

The color of meteors, or shooting stars, depend on the meteoroid’s (objects in space that range in size from dust grains to small asteroids) chemical composition and its interaction with the atmosphere. Metal atoms of the burning meteoroid emit different wavelengths of light (ionized atoms cause emission of photons which have a specific wavelength, a color), as well as atoms and molecules of the air.

Sodium (Na) atoms give an orange-yellow light, magnesium (Mg) a blue-green light, iron (Fe) atoms a yellow light and ionized calcium (Ca+) atoms add a violet hue, while molecules of the atmospheric nitrogen (N2) and oxygen atoms (O) give a red light. The ultimate visible result depends on which one of them is more dominant – a metal atom emissions or air plasma emissions.

Shooting stars with their long tails, speed, and energy load remind me of spermatozoids rushing towards the egg – the Earth. Overcoming hostile atmosphere, a womb, they reach the ground and change form, thus planting or becoming catalysts for our imagination, dreams, and scientific research.

The majority of found meteorites are simple space debris, as large impacts are fairly rare, however, they do happen. Encounter with such an object makes you feel at awe. It challenges your everyday parameters of distance, space and time, and breaks – even for a second – perceived civilized boundaries of mundane.

Abundant yet so rare meteorites are like a quality action or an idea. A singular event can drastically alter individual and societal narratives, forces to take a new course. Similarly only one in fourteen million of the ejaculated sperm reaches its goal, but once it does, it picks up a chemical signal from the egg that will help to find a way forward.

In the 17th century, it was believed by many researchers that spermatozoa contained a tiny, completely pre-formed human within it. Today we know that it is not true, but we still enjoy packing our wishful thinking into one image – a superhero.

Not so current obsession with superhero blockbusters can be explained quite simply in comic book writer’s M. Millar words – Superheroes were huge in the thirties during the Great Depression. The worldwide recession will probably last until the end of the decade. You’ve gotta entertain everyone through it!

And yes, the popularity of Marvel superhero movie franchise started just after the financial crises of 2008 and culminated last year in 2019 with epic finale titled Avengers: Endgame. In this movie, like in many other products of this genre, protagonists and antagonists have an encounter with some type of stone or mysterious energy that would give them immense powers. However simplistic these types of screenplays may appear, superhero movies display very high levels of humanity that audiences can identify with.

Five so-called Infinity stones from the Avengers movie franchise are coincidentally the same color as our shooting stars and represent primordial elements of space, reality, time, soul, and mind. The dream-team of superheroes fought, sacrificed, and defended these stones to stop genocidal antagonist, named Thanos, along the way experiencing personal dilemmas in the face of unfathomable threats.

With these tiny mystic space stones, they have measured their intimate spiritual needs, the burden of responsibility, and abstraction of death and life possibilities. Similarly to a heat polished meteorite in my palms during the visit to the Ethnocosmoloy museum. A stone-like piece of metal, once a shooting star, demands the increase of one’s parameters.

Rupert’s programmes are supported by the Lithuanian Culture Council