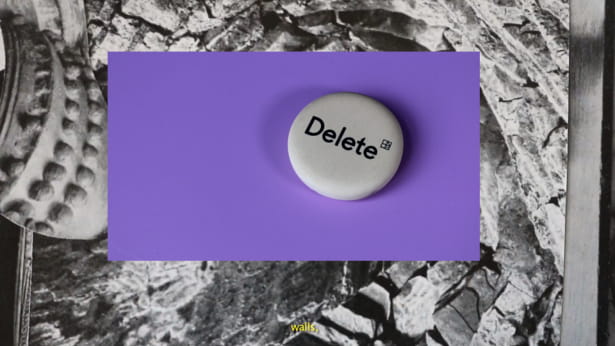 A metal spoon stirs coffee in a ceramic cup. As the liquid slowly spins, transforming its translucent skin into a frothy galaxy, an invisible man whispers, ‘maybe an object is what serves as a link between subjects, allowing us to live in society, to be together’[1]. It is 1967, the tide of consumerism, the height of the Vietnam War. Jean-Luc Godard, who spoke these words through one of his actors, wondered how he could be reconciled with others when consumerism and conflict alienated people, divided populations across the globe and altered the meaning of value. He turned to a cup of coffee for contemplation, immersed in his own contemporary cosmos.

Today, a whispering voice can still be heard, yet it is the one of a woman. Eli Cortiñas, in her film, Walls Have Feelings (2018), delves into the ecology of objects, exposing the links between their aesthetic appearance and some of the historical and socio-political events that shape contemporary life and subjectivity. The film – partly developed during her residency at Rupert – opens up the microcosm of dictators’ offices, their architectures, interiors and even the small accessories on their desks. Newly filmed scenes alternate with close-ups and landscape views from sourced images and found footage. Gradually, these scenes unveil the protagonists of the film. These are the office rooms and walls, which contain, hide and reinforce forms of power. Specifically, Cortiñas focuses on power that has been forged through Fordist technologies of production and control, through dictatorial regimes such as the Nazi regime and today the global force of neoliberalism .

Cortiñas exposes connections between subjects in a non-linear way, jumping vertiginously with cunning editing techniques to different historical moments, which she makes reverberate in our shared present. The film in fact references labour activities, echoing both present and past, corporeal and cognitive forms of exploitation. It mixes familiar scenes of workers leaving the factory, laboratories producing all too-human robots and the works of artists themselves. Cortiñas weaves together all this material in a loop which is as navigable as it is hypnotic.

There are some parallels with Godard’s film. Both reflect on the events of their time. But instead of adopting objects as devices ‘to think with’, like a cup of coffee, Cortiñas evokes their animist power, delving into something that is embedded in them – as the title remind us. ‘What’s the role of those silent objects? What do they know that we don’t?’ her voice asks repeatedly. Images of buildings, walls, garments, artworks and logos are dissected and recomposed into handmade cinematic collages, which both reveal and challenge the references they carry. The film becomes a container of objects and spaces, an open archive in process. This film not only speaks of political powers and their resulting oppression, but also processes the very aesthetic through which these powers operate. ‘[The] Ethnical cleansing of history has become a standard procedure’ (…) ‘silencing the past has become a standard procedure’, states Cortiñas in her film. By displaying lost and invisible clues, through reworked images, she digs into visual memory, testing both cultural and cinematic memory itself.

[1] Godard, Jean-Luc, Deux ou Trois Choses Que Je Sais d’Elle, 87 mins, 1967. Cortiñas loosely referenced this film in one of her previous works, Two or Three Things I Know About Her (2007), a single channel video, which focuses on the figure of a single elusive woman to build a complex, layered narrative about several women. The combination of multiple women into a single person was a fragmentary attempt to create a portrait of the artist’s own mother.