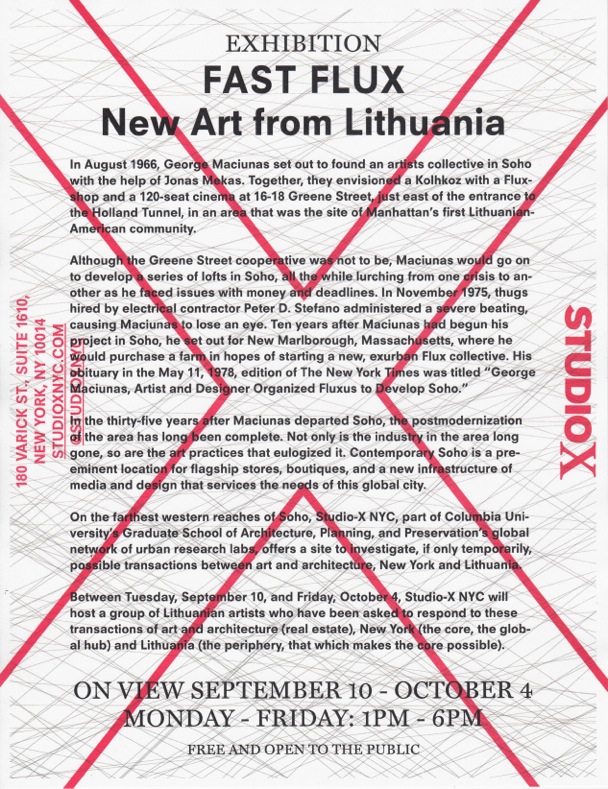 In August 1966, George Maciunas set out to found an artists collective in Soho with the help of Jonas Mekas. Together, they envisioned a Kolhkoz with a Fluxshop and a 120-seat cinema at 16-18 Greene Street, just east of the entrance to the Holland Tunnel, in an area that was the site of Manhattan’s first Lithuanian-American community.

Although the Greene Street cooperative was not to be, Maciunas would go on to develop a series of lofts in Soho, all the while lurching from one crisis to another as he faced issues with money and deadlines. In November 1975, thugs hired by electrical contractor Peter D. Stefano administered a severe beating, causing Maciunas to lose an eye. Ten years after Maciunas had begun his project in Soho, he set out for New Marlborough, Massachusetts, where he would purchase a farm in hopes of starting a new, exurban Flux collective. His obituary in the May 11, 1978, edition of The New York Times was titled “George Maciunas, Artist and Designer Organized Fluxus to Develop Soho.”

In the thirty-five years after Maciunas departed Soho, the postmodernization of the area has long been complete. Not only is the industry in the area long gone, so are the art practices that eulogized it. Contemporary Soho is a preeminent location for flagship stores, boutiques, and a new infrastructure of media and design that services the needs of this global city.

On the farthest western reaches of Soho, Studio-X NYC, part of Columbia University’s Graduate School of Architecture, Planning, and Preservation’s global network of urban research labs, offers a site to investigate, if only temporarily, possible transactions between art and architecture, New York and Lithuania.

Between Tuesday, September 10, and Friday, October 4, Studio-X NYC will host a group of Lithuanian artists whose have been asked to respond to these transactions of art and architecture (real estate), New York (the core, the global hub) and Lithuania (the periphery, that which makes the core possible).

Free and open to the public. No RSVP required.

A panel of speakers will discuss the exhibit, the role of art and architecture in Soho, and the role of Lithuanian artists George Maciunas and Jonas Mekas in the establishment of the arts community in the area.

Sponsored by Rupert, the Lithuanian Ministry of Culture, and the Network Architecture Lab and Studio-X at the Graduate School of Architecture, Planning and Preservation, Columbia University.