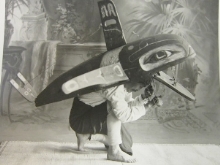 The first seminar will introduce three concepts arising from research done at the close of the 19th century by cultural figures involved in developing new applications within quickly expanding fields, specifically anthropologist Franz Boas’ “secondary rationalization”, art historian Aby Warburg’s “pathosformel,” and sociologist Gabriel Tarde’s “quantification”. By thinking through these concepts together, we will consider their shared traits as partial, even symptomatic methods, and how their insights question presumed trajectories of modernity, and might yet be relevant.

The second seminar will look at postwar artworks that explicitly borrow from ethnographic, museological, and historiographic economies in order to propose new parameters of appreciation, prohibition, and refusal. Writer Danilo Kiš’s conceptualizing of an ever-condensing, ever elusive encyclopedia entry will be considered in dialogue with specific contemporary practices, as will Sergei Tretiakov’s proposal in The Biography of the Object (1929), for a composite understanding of object and persona.

Fionn Meade is a writer and curator based in New York. He has most recently been Curator at SculptureCenter, NY, where exhibitions include Scene, Hold, Ballast, with David Maljkovic and Lucy Skaer, and such group exhibitions as Time Again, Knight’s Move, a survey of new sculpture in New York, and Leopards in the Temple. Additional recent curatorial projects also include Nachleben, co-organized with Lucy Raven at Goethe Institut, NY, which engaged Aby Warburg’s thinking and After Images at the Jewish Museum of Belgium. He has previously been a curator at the Henry Art Gallery and worked with Tom Eccles on Rachel Harrison: Consider the Lobster, and Maria Lind on The Greenroom at the Hessel Museum of Art and CCS Bard Galleries. His writing appears in Artforum, Bomb, Bidoun, The Fillip Review, Mousse, Spike Quarterly, and Parkett, among other publications, and he was the recipient of an Arts Writer Grant from Creative Capital and the Andy Warhol Foundation. Recent catalog writing includes essays on Elad Lassry for the Kunsthalle Zürich (JRP/Ringier), and Mark Morrisroe for the Fotomuseum Winterthur (JRP/Ringier). He is currently a faculty member at the Center for Curatorial Studies, Bard College, and in the MFA program for Visual Arts, Columbia University.

The event is open to public. To join please register writing to info@rupert.lt until the 15th of October, 2012.