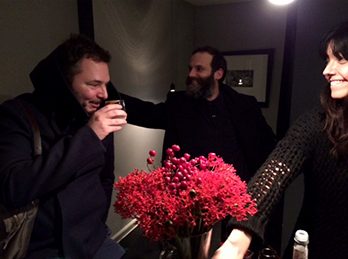 Garnier’s practice navigates around benign objects through olfactive lens and History. The notion of volatility, tubes and terrestrial gravity interest him. Their success or failure too.

– conducted and realised the SMELL INTERVIEW. Volunteers where filmed while smelling a series of odorants in a precise chronology under fixed conditions. The video piece GOLDFISH ON DRONES (2015) shows a mime actor reproducing live a compilation SMELL INTERVIEW screened in B&W. The actor was never put into contact with any odorant.

– After being stolen his wallet at Amsterdam Airport on the way to Lithuania, he praised during 4 days in front of the monolithic gigantic fridge of Rupert kitchen for food left overs. This event originated the performance SUBLIMATION (2015)