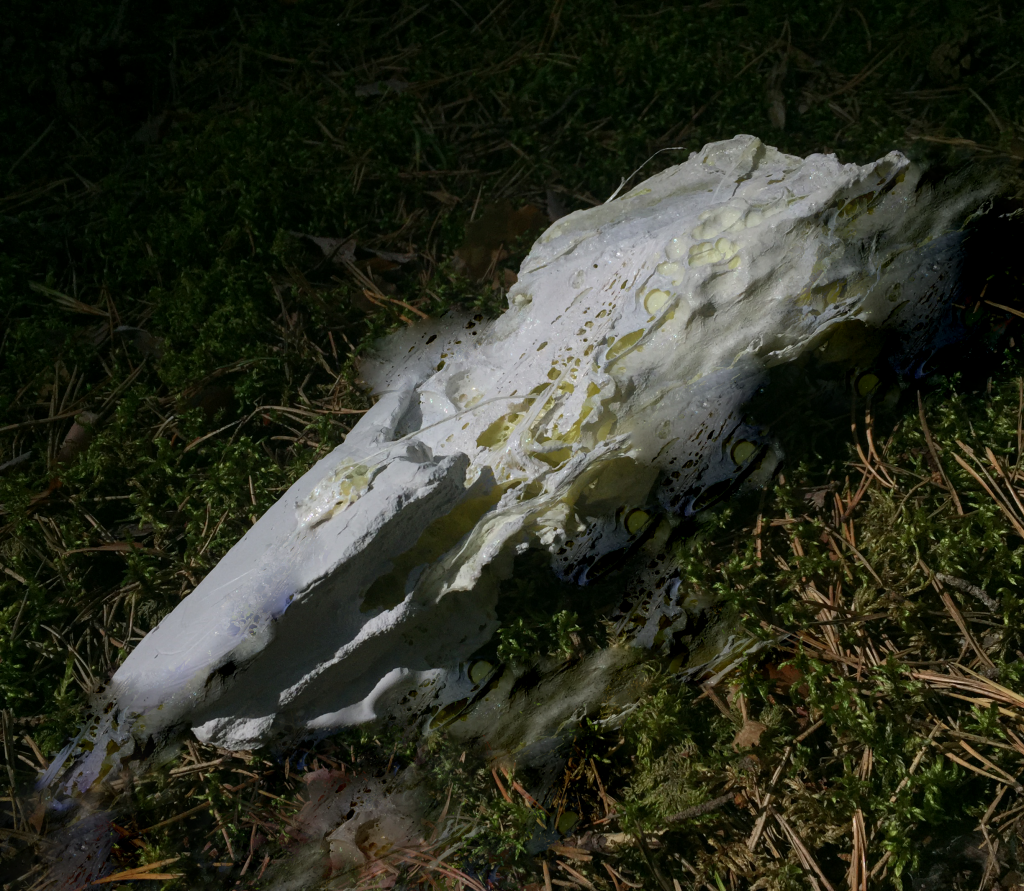 Core.pan in conversation with Giulia Civardi

Void of course, the title of the work you developed while in residency at Rupert, seems to refer to a moment of cosmic passage, a moment of suspension before transformation. Can you speak about how you made these works and in what ways they engage with transformation?

These works evoke the experience of transformation. At Rupert, we were living in an in-between state. We spent most of our residency in our studio, exploring ideas for future large-scale sculptures. We also experimented with specific materials including epoxy clay and resin, latex, pigments and stone. At one point during the residency, we took these studies out of the studio and created compositions which we then enhanced with subtle digital alterations or re-interpreted through photogrammetry.  All the works we presented here in the publication and at Rupert are fragments of this research. The core of this project was simply to let ourselves experience the phenomenon of emergence and to build sculptural situations around this.

Your work explores connections between the different branches of engineering and mysticism through sculpture, video and immersive image-scapes. In particular, your work looks at ecology and the natural environment. How did Rupert’s surroundings influence your practice?

It was obviously an inspiring working environment, and Rupert’s building is itself a pretty majestic architectural object. We liked the woods around Rupert, and even though the woods are still quite urban, we managed to find areas that seemed almost untouched and covered with moss. We tend to spend a lot of time in the wild, this is fundamental to us as people. Nature in all its metamorphic aspects directly affects our practice.  We try to investigate Nature’s secrets, to guess its future mutations in the coming tech-age and channel its invisible forces with every core.pan project. For instance, we study the shapes Nature produces, which are sharp and beautiful, and think about how we can incorporate them into our practice as design principles.

Since starting to work together in 2016 as an artist-duo engaged in research, you’ve dedicated your project to experimentation and testing different concepts and techniques, mostly at residencies. Where will you take the research you developed at Rupert?

There are a few things we have in mind since we started working together as core.pan. This includes making a feature film; collaborating with scientists, such as AI developers and digital biologists; and being able to build immersive artworks/environments where people can get physically lost and experience extreme emotions. This means developing our work to the extent that we have access to larger-scale production methods. At Rupert,  we got the opportunity to develop important concepts which are at the foundation of core.pan, and we had great encounters there. We’re moving toward our goals by building new connections and uncovering new horizons. We know the global ecosystem – our species included- is at the edge of collapse, and we feel that we’re not useful as critics, if acting in a confrontational way. So we explore, we design and we choose to focus on solutions, that is, thinking through positive perspectives, being proactive and acting with integrity. But at the same time, we are also interested in transcendence,  understood as going further and beyond any dogma or schema, and exploring and embodying those deeper states of mystery that exist within reality and the world around us.