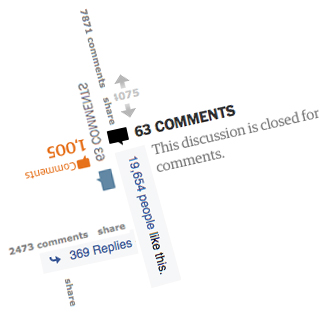 David Stein was born in Philadelphia, PA. He lives and works in Queens, NY, received an Bachelor of Arts in Philosophy from the University of Chicago, and an Masters in Fine Arts from the California College of the Arts. David has had solo shows in San Francisco, Boston, and Malmö. He has been included in group exhibitions in San Francisco, New York, and Dresden. He received the Murphy Fellowship (2003), CCA All College Honors (2003), been awarded residencies at the Bemis Center (2006) and the MacDowell Colony (2008), and been featured in Frieze and New York Magazines.

Online forums are fascinating sites of exchange. Participants from all over the world can meet, debate, inform, and carry on a tradition in democracy that dates back to the Agora in Athens. Or they are places where strangers deliver vitriol and ad-hominem attack between frustratingly small bits of honest political, cultural, or ideological conversation. Looking at these conversations can feel like all of the optimistism and possibility of the Agora has been drained from democracy. So, drawing upon Rhetoric, the psychology fields of Discourse Analysis and Applied Linguistics, David was gathering participants from Vilnius, through a guerilla action, create a pocket utopia online. He pulled visitors to Rupert and from Vilnius at large. First, they sorted through possible ways to engage online, democratically decided how they would act online, and then acted collectively, by hijacking online conversations, steering it to an ideal of civility, opening engagement and discourse. This was an intervention in conversational space.