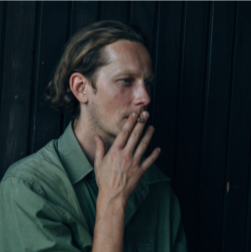 Kęstutis Montvidas (b. 1984) creates installations based on subjective interpretations of scientific data. His artworks have been presented at CAC, Russian Drama Theatre, Malonioji 6 (Vilnius). He is a last year sculpture MA student in Vilnius Art Academy.

During the time in the Alternative Education program, he will explore a couple of subjects: astronomy (celestial study) and language itself as the most universal mean to signify things. He is going to investigate phenomena of apofenia (observation of meaningful symbols in random data) and pareidolia (observation of recognizable structures in where they are not present, for example, secret messages in musical records). Artist will present a distinctive interpretation of literary work – all the dots in the text will be connected in order to set up visual database. In turn, abstracted visual content reminiscent of celestial bodies arrangement in the firmament will be recoded to a holographic postcard. Thus the artist will be questioning the boundaries of empiric, as well as scientific knowledge, transforming one event into another.