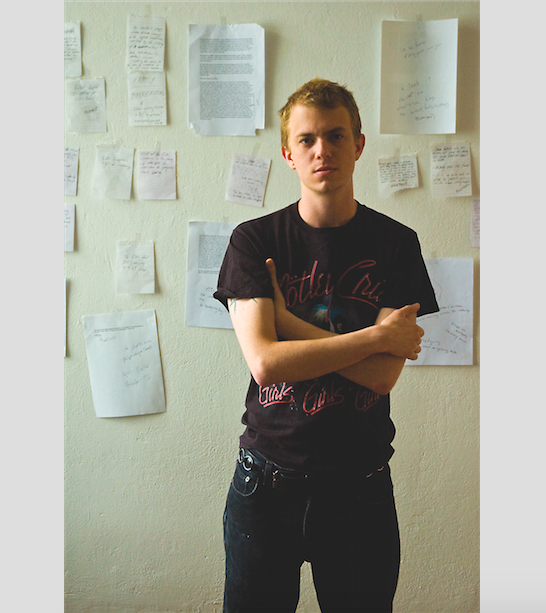 Rupert is happy to invite you to a lecture and workshop by the writer Travis Jeppesen on 13th and 14th of January, 2016.

Object-oriented writing is a new approach – neither poetic nor art-critical, yet retaining characteristics of both – that attempts to inhabit the object. A writing that positions itself within the work of art, and also includes all the necessary contradictions and impossibilities embedded within such an approach. This allows a multiplicity of possible writings, ways, approaches, to flow forth, wherein the impulse of formlessness becomes the form.

It could be suggested that the father of object-oriented writing is the Gertrude Stein of Tender Buttons, the mother the Roland Barthes of Mythologies. Though OOW is more likely their aborted fetus, having been revivified on a UFO by an extra-dimensional alien race that exists on a plane parallel to our own, and returned to this reality in order to contaminate it.

In Vilnius, Travis Jeppesen will give a talk on his major projects with object-oriented writing over the past few years, including 16 Sculptures, his installation featured in the 2014 Whitney Biennial and as a solo exhibition at Wilkinson Gallery in London. In addition, he will offer a workshop for artists, writers, and others interested in exploring the potentialities of object-oriented writing as a form.

The workshop will take place at Kazys Varnelis museum on Wednesday, 13 January at 2 pm. Registration is compulsory at info@rupert.lt as spaces are very limited.

The lecture will take place on Thursday, 14 January at 6 pm at Malūnų st. 3 (Vilnius Academy of Arts – C1, ground floor)

Travis Jeppesen is an American writer and artist based in Berlin and London. His books include Victims, Poems I Wrote While Watching TV, Dicklung & Others, All Fall, and Wolf at the Door. Jeppesen’s most recent novel, The Suiciders, was published by Semiotext(e) in 2013; subsequently, he performed “marathon readings” of the entire novel, lasting eight hours without pause, at the ICA in London and the Whitney Museum of American Art in New York. That year, Jeppesen received an Arts Writers grant from Creative Capital/the Warhol Foundation for both his art criticism and the creation of object-oriented writing, a metaphysical form of art writing that attempts to channel the inner lives of objects. His first major object-oriented writing project, 16 Sculptures, was published in book format by Publication Studio, featured in the Whitney Biennial as an audio installation, and was the subject of a solo exhibition at Wilkinson Gallery in London in the summer of 2014. He has taught as a visiting lecturer at Goldsmiths, Leeds Beckett University, and the Royal College of Art, where he is a PhD candidate in Critical Writing in Art and Design. His writings on art have appeared in numerous monographs and exhibition catalogues, as well as in Artforum, Frieze, and Art in America, among other publications.

This talk is part of a series of talks organised by Rupert in collaboration with The Academy of Fine Art at Oslo National Academy of the Arts (Norway) and The Living Art Museum (Iceland) in connection to the exhibition ‘Double Bind’ soon on display in Oslo, Norway. Upcoming lectures by Joshua Simon and Marina Vishmidt will look at social reproduction, affective labor, emotion economies, object-oriented writing, and neo-materialism among other themes. Additional information will soon be available on the www.doublebind.eu blog.

The project “Interdisciplinary Art Project “Politics of Emotion: Art in the Expanded Sphere”“ is a collaboration between Rupert (Lithuania), The Living Art Museum (Iceland) and Oslo National Academy of the Arts (Norway). It is produced under the Programme LT07, the EEA Financial Mechanism and Lithuanian Republic.